It’s not just big decisions that depend on trust, though, it’s the small ones, too. We try jackfruit because we trust the health foodies spreading the word about its amazing benefits. We try Colgate Optic White Platinum Express White Toothpaste in Fresh Mint because we trust some seemingly-unbiased blogger who raved about it.

For brands, consumer trust is vital for survival, and loss of trust is reason for panic. Consider how Comcast rebranded itself as Xfinity after consumer complaints about high prices and poor customer service, a move that cost the company millions and didn’t alter consumer opinion because they didn’t change anything about their product, pricing or service.

If the trust bar is high for consumer goods, it’s stratospheric for nonprofit organizations. Trust drives most income for most nonprofits, whether from individual donations, foundation grants, or government contracts — lose trust, and a nonprofit loses its lifeblood.

“Trust is the glue of life. It’s the most essential ingredient in effective communication. It’s the foundational principle that holds all relationships.” — Stephen Covey

Can a nonprofit with a relatively generous marketing budget be trusted?

While it would be a lovely world to have full confidence in every nonprofit, scammers and well-intentioned-but-inept leaders have prompted caution about donating to nonprofits with relatively high administrative expenses. Enter Charity Navigator, a nonprofit assessment site that aims to help potential donors sort the good from the bad. It gets points for meaning well, however, there’s a major concern: it doesn’t rate nonprofits by effectiveness, but rather by low administrative expenses. Not the same thing.

Another charity assessment organization, GiveWell, focuses primarily on cost-effectiveness rather than percentage of the organization’s budget that is spent on overhead. Its finding? The most highly effective nonprofits actually spend more on administrative expenses. Inattention to marketing stifles nonprofit expansion, which actually reduces their ability to help more people.

In the real world, nonprofits of every size and shape require some sort of marketing, communications, and fundraising support to advance their missions. The issue, therefore, is not whether nonprofits ought to allocate a reasonable amount of their budget to marketing, but rather, how to spend their marketing dollars wisely, in a way that reinforces trust and improves effectiveness.

To learn more about the daily concerns of a nonprofit marketer, we chatted with Brock Clauser, marketing director of Operation Warm. Located in Pennsylvania, Operation Warm provides warmth, confidence and hope to children in need through the gift of brand new winter coats. We learned a lot, and here are the insights that really stood out.

The nonprofit marketer’s #1 audience isn’t who you think it is.

If asked to explain who the nonprofit marketer’s primary audience is, you’d probably expect the answer to be donors, or maybe partners, or even program recipients. Clauser suggests it’s someone else: development staff, “There’s always the love/hate relationship between marketing and sales, but my number one priority is to support the development director’s goals for the year”. He regularly makes sure that the marketing and development teams are in sync, asking questions like:

Every nonprofit should build out their personas.

Personas are fictitious characters representing the different types of people who will visit your online platforms. Clauser says, “A persona exercise doesn’t have to be an insane process — we review them annually to identify who we want to speak to and communicate with in the coming year. And, the tools are often free. A great one is surveying your donors and/or supporters”. He recommends making sure at least 30% of survey questions are open-ended to get qualitative data, which is especially important if the survey audience is small. Such surveys complement the quantitative data they gather from sources like Google Analytics.

When we sat down to speak with Clauser, it was during the height of Facebook’s 2018 privacy controversy. While social media had historically been a great resource for him to gain audience insights, he acknowledged that will probably be changing in the future, and he might not be able to collect as much. “But, Zuckerberg is never going to own your website”, which means that a nonprofit’s website might be an increasingly superior way to gain audience insight.

Make your donors the heroes.

The most basic building block of marketing is to create a framework for your messaging, one that efficiently and consistently describes your brand. It’s a tool that both for-profit and nonprofit organizations require. But there’s a nuance in nonprofit messaging to the donor audience: “It’s not about making the nonprofit look smart; it’s all about making the donor feel smart,” Clauser says.

“Marketing, especially content marketing, is a tough job, you never know what’s going to hit home,” says Clauser, “at the end of the day, no one has a Magic 8 ball for what will work”. The Pareto principle states that, often, roughly 80% of the effects come from 20% of the causes, and marketing is no different.

How to establish a nonprofit marketing budget

As with for-profit organizations, nonprofit marketing is not a one-time, set-and-forget initiative, but rather an ongoing commitment to support goals like:

An effective nonprofit will have a dedicated marketing budget rather than allocating it sporadically. A dedicated budget allows a nonprofit to track and measure the impact of your marketing investment so that you can separate the successes from the failures.

The most common method for determining a marketing budget is probably percentage-based, often 5 to 15 percent of the nonprofit’s operating budget. For many nonprofits, it’s a flawed model and here’s an illustration as to why: let’s say you have an operating budget of $100,000 and decide to allocate 10% to marketing, providing $10,000 for the year. Even a marketing novice will realize that won’t get you much, maybe a theme website and some collateral, and so you need to consider another element — value.

The best way to set a marketing budget is to consider what it will take to get to job done. Think critically about the kinds of marketing tactics you’ll undertake and what you’ll need to implement them. Don’t be afraid to spend what it takes if it will give the value you want. If the idea of allocating more than 15% of operating budget is nerve-wracking, you can always layer on the incremental method, where you regularly (often quarterly or bi-annually) track and assess performance, then increase or decrease accordingly. Of course, the more you spend, the more you’ll need to justify yourself by tracking and measuring results.

If you’re struggling to nail down a specific budget or just need help planning for the nonprofits marketing down the road, drop us a line. We’d love to to talk.

5 Google Font Pairings for Your Next Web Design Project 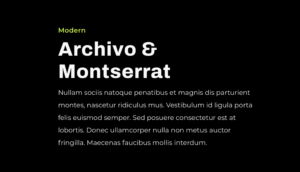